Amazon — that pioneer of frictionless consumption, the inventor of a device that allows you to order toilet paper with a few words spoken at home — is now rolling out the most convenient method of in-person grocery shopping yet invented. You walk in, you wave your palm over a sensor, you grab some stuff, you leave. Hours later, your bank account is a little lighter.

The price? Whatever Whole Foods is charging for groceries these days. Plus, your privacy. And possibly the future of retail store employment.

This isn’t the work of science fiction. It’s the new cashierless Whole Foods on Riverside Dr. in Sherman Oaks, powered by Amazon’s “Just Walk Out” technology. The store, which opened March 16, allows shoppers to peek into the future of grocery stores, one riddled with questions about surveillance, privacy, and labor.

Inside the store, hundreds of black cameras hang from the ceiling, watching as you move through the aisles. They calculate what you pull from the shelves and what you put back, know where you lingered and when you changed your mind. They’re communicating with a network of sensors on every shelf, and working together, they scrupulously keep your tab.

‘Just Walk Out’ technology is made possible by a combination of computer vision, sensor fusion, and deep learning — similar to what you’d find in a self-driving car,” says Thi Luu, director of product management and physical retail technology at Amazon. 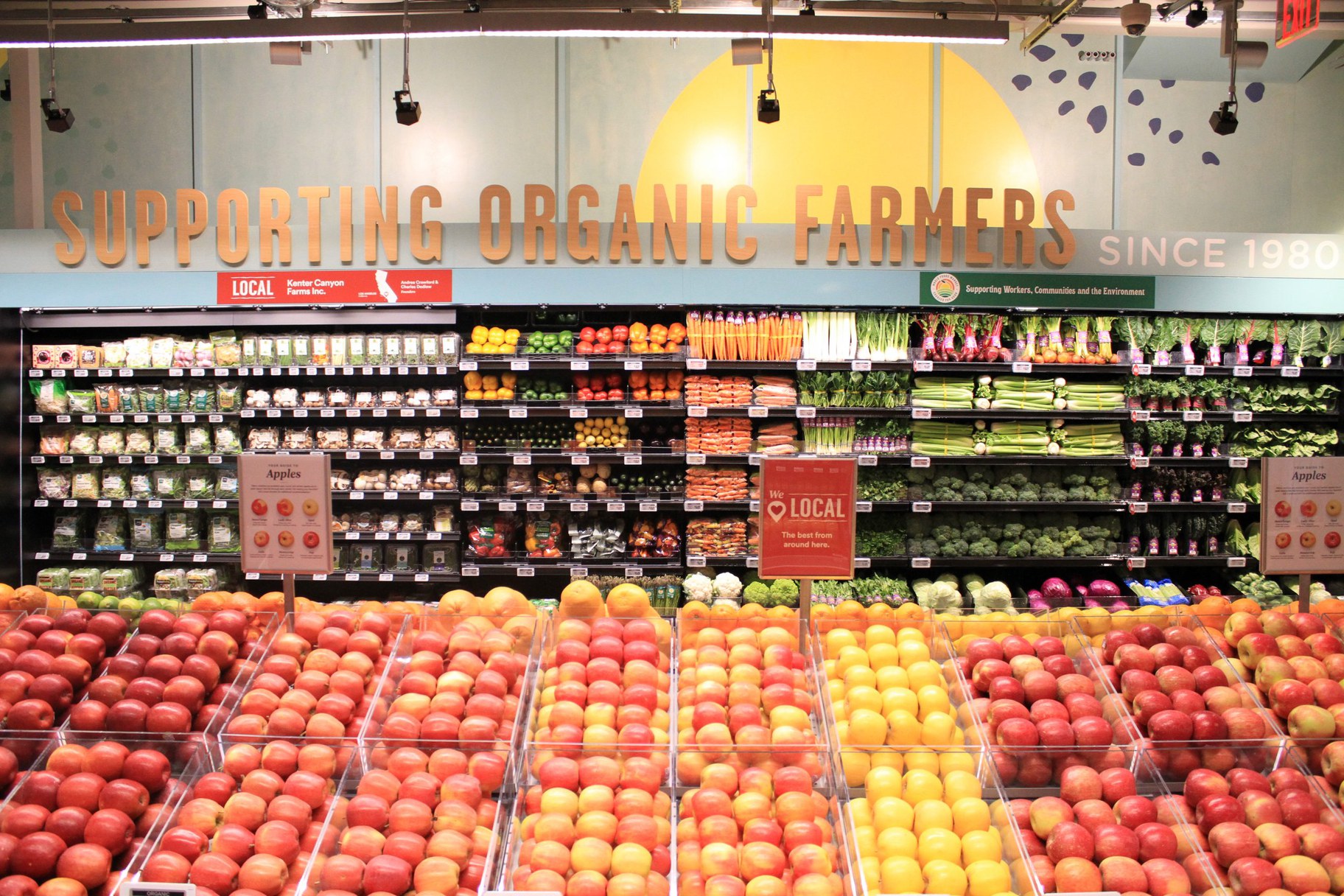 Hundreds of cameras communicate with sensors placed under food items to recognize what you take off the shelves and leave with. Photo courtesy of Whole Foods.

Amazon opened its first Amazon Go convenience store using “Just Walk Out” technology in Seattle in 2018. Now there are 20 of those stores in the U.S., plus 10 full-sized Amazon Fresh grocery stores. Additionally, the company has sold the technology to more than a dozen other businesses, including at least one in Los Angeles.

The watching and tracking and palm-scanning actually doesn’t represent a big jump in Amazon’s data collection on its customers, says Christo Wilson, associate professor of computer science at Northeastern University. Purchase history, web clicks, consumer preferences — “They already have this information,” he says. “It’s just being gathered now in kind of a new way.” 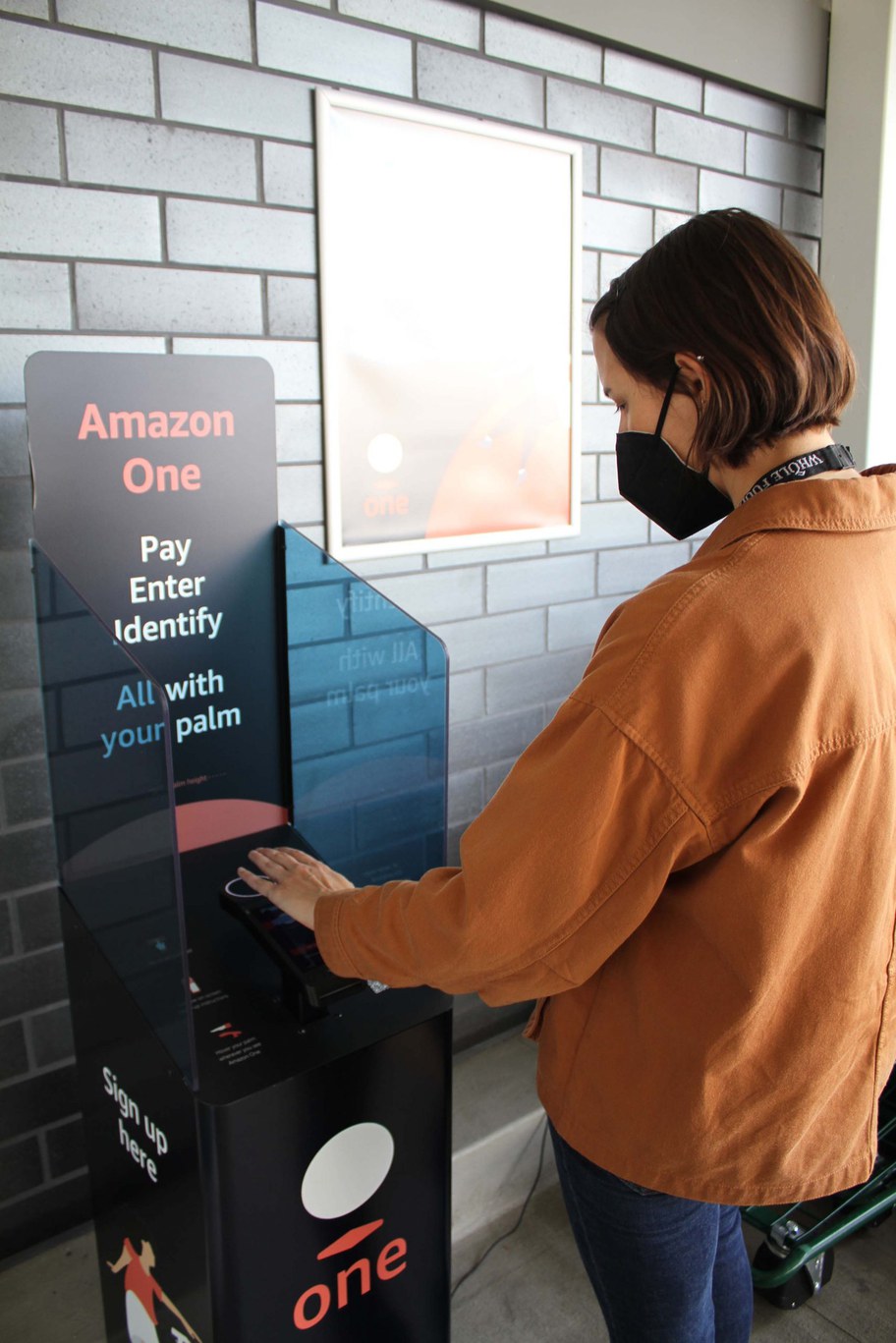 A Whole Foods customer hovers her palm over Amazon One, a technology that connects biometric data with an Amazon account and allows you to be billed for groceries without a cashier. Photo courtesy of Whole Foods.

Amazon doesn’t deny that it collects this data online or in person. In response to KCRW’s questions, Luu said the company “takes data security and privacy seriously, and any sensitive data is treated in accordance with our long-standing policies.”

“I don’t appreciate cameras at all, anywhere,” Boone Wilder, 34, says on his way out of the Sherman Oaks Whole Foods on a recent morning. “We’re going to wake up in a few years and realize that we’ve totally transformed our society in a way that’s not good for anybody.”

Customers like Wilder – who don’t want to scan a palm or use a QR code to shop – can still shop here by opting to pay at a self-checkout register using a credit card. An Amazon account is not required to shop at the store.

But Wilder had concerns about labor that the self-checkout does not remedy. “I don’t really appreciate the fact that they’re not paying people to work there because there’s plenty of people that need that job,” he says. “And then I also don’t appreciate having to pay for a service that is not provided.”

According to Luu, staff size is about equivalent between the cashierless Whole Foods and a similarly-sized Whole Foods without the technology. Luu says employees are just using their time differently, “allowing them to spend even more time interacting with customers and delivering a great shopping experience.”

In fact, on a recent visit to the store, employees bustled around cheerfully greeting customers, demonstrating the technology and offering to point the way to items on the shelves.

Remember earlier in the pandemic, when we sang the praises of the grocery store cashier who stood behind plexiglass, mediating fights over toilet paper, and separating from their families for fear of infecting them with the virus? Grant fears they’ll soon be out of their jobs, especially if other stores copy what Amazon is doing.

Less than two weeks after the opening of the cashierless Whole Foods in Sherman Oaks, Grant’s union voted to authorize a strike, asking in part for more hours for part-time employees. 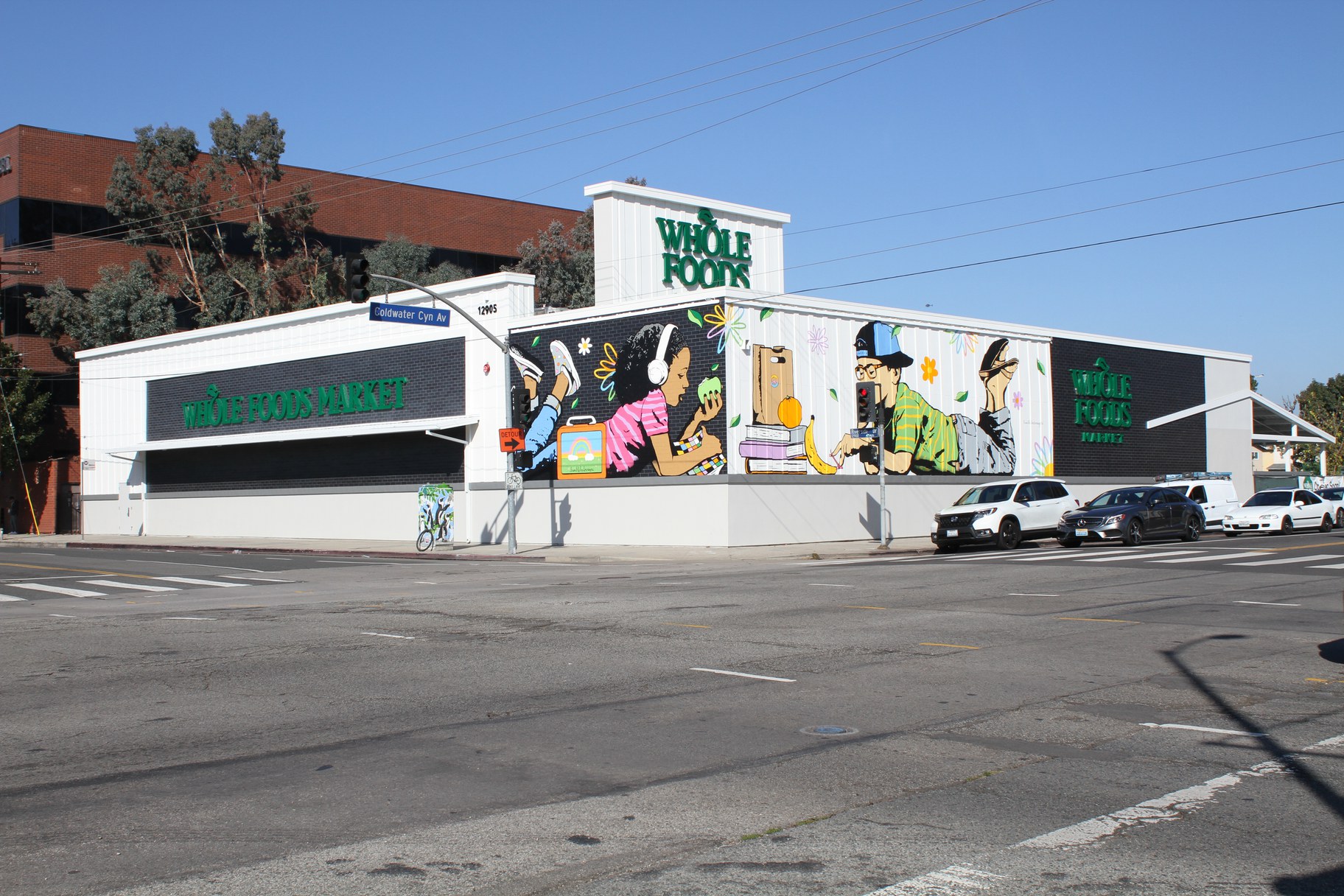 Two murals are painted on the exterior of the store on 12905 Riverside Drive in Sherman Oaks, which opened on March 16. Photo courtesy of Whole Foods.

Right now, Amazon is only operating two Whole Foods in the country with this technology. But if Amazon can cut costs on labor, they can also lower their prices. And if they lower their prices, other grocery stores that pay union wages might not be able to compete.

Supermarket retail analysts say other grocers will have to innovate.

Todd Hale, a former analyst at Nielsen, predicts large retailers like Kroger and Walmart will grow as long as they continue to invest in new technology. “They’re going to be the ones that survive,” he says. Smaller, regional chains and mom-and-pop stores will struggle to stay afloat, Hale predicts.

Back at the Sherman Oaks Whole Foods, customer Corey Gregory expressed concerns about the new technology. “I like cashiers. I like being able to talk to someone. They were very nice,” she said of the employees in the store. “But I think I like the old school better.”

But like others who expressed trepidation about the new shopping experience, Gregory didn’t vote with her feet. She drove away with a car full of groceries.

Santino Godoy Blanco passed away, a four-year-old boy who had been the face of a national vaccination campaign.