…. with an 8% drop the new normal in an increasingly faithless US, study shows

The numbers of people attending religious services never fully bounced back after the Covid-19 pandemic, with an 8 percent drop overall — the latest sign of faith’s declining role in modern-day America.

A quarter of adults never attended religious services before the pandemic arrived in early 2020. By Spring of 2022, when holy buildings had largely returned to normal, that share had jumped to a third, a study shows.

Researchers at the American Enterprise Institute, a center-right think tank, found that the biggest drop-offs were among younger adults, liberals, the unmarried, Hispanic Catholics, and Protestants.

‘The pandemic appears to have pushed out those who had maintained the weakest commitments to regular attendance,’ says the 11-page report, authored by AEI’s polling expert Dan Cox and others. 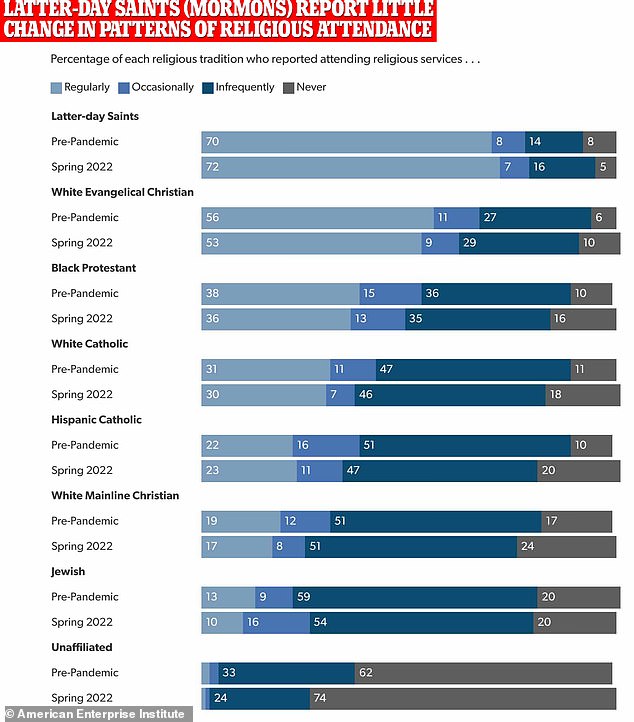 ‘Before the pandemic, roughly half of Americans were occasionally or infrequently attending services. Now, that number has dropped to about four in 10.’

COVID-19 lockdowns shuttered churches, synagogues and temples, disrupting religious participation for millions. At the peak of the contagion in the summer of 2020, only about 13 percent of Americans turned up to worship in person.

While the numbers of Jewish and Mormon worshipers largely returned to their pre-pandemic levels, the shares of mainstream Christians, Catholics and black protestants did not recover when the contagion passed.

‘These changes in worship help us understand how the pandemic has diminished — perhaps permanently — the role of religious participation in the lives of individual Americans and society as a whole,’ said the study.

Using polling from NORC at the University of Chicago, researchers also found that the numbers of those identifying as Mormon, Jewish or with the various branches of Christianity changed little over the course of the pandemic.

The study of more than 9,000 adults echoes previous findings, including a phone survey of 1,000 Protestant pastors by Lifeway Research, who said that attendance at Sunday services last August was only 85 percent of pre-pandemic levels.

The numbers of liberals, unmarried people and younger adults attending religious services fell the most over the course of the pandemic 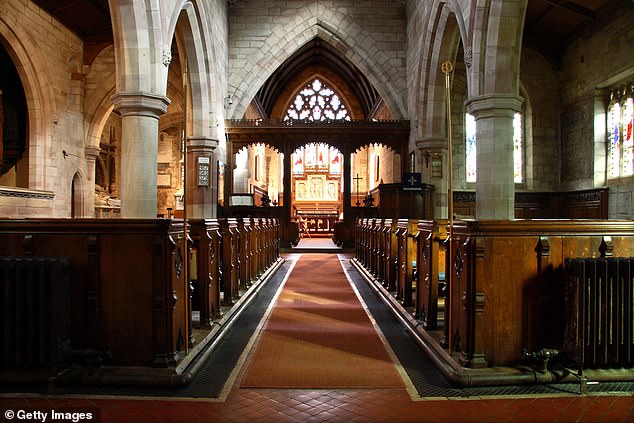 Churches, like this one, shuttered during the pandemic and some even switched to online services. Congregations have picked up since they reopened last year, but never bounced back to pre-pandemic levels.

Likewise, the Institute for Family Studies, a center-right think tank, found that the share of regular churchgoers dropped 6 percentage points to 28 percent in 2021, while the share of secular Americans who never attended religious services grew by 7 percent from 2019-21.

The pandemic declines in attendance come as many churches and faiths were already facing declining attendance, and against a backdrop of a decades long trend of a shrinking share of the population identifying as religious.

A Pew Research Center paper found that the number of adults identifying as Christian dropped from 90 percent in the 1990s to 64 percent last year, and would likely trend downwards into a minority faith over the coming decades.

The decline is largely due to Christians switching to ‘nones’ — a secular mishmash of atheists, agnostics and those with no religious identity — which was set to grow from about 30 percent last year to as much as 52 percent by 2070.

The drift away from Christianity is a trend across much of the developed world, hastened by a slew of damaging sex abuse scandals and cover-ups in the Catholic, Southern Baptist, Mormon and other churches. 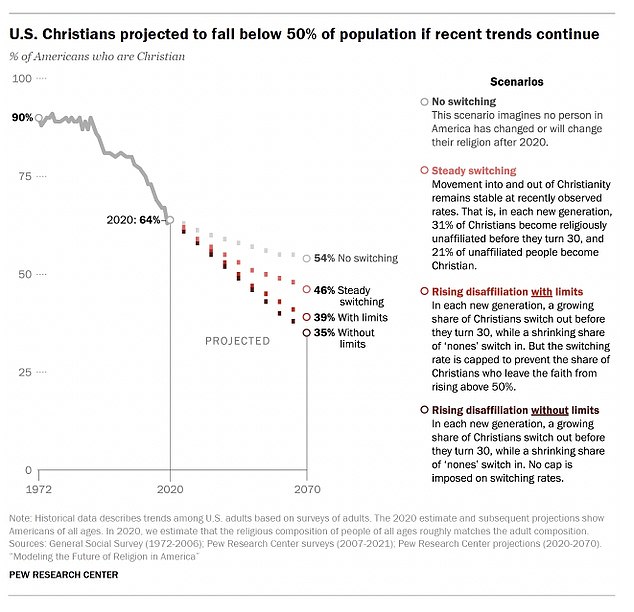 Pew researchers projected possible religious scenarios for the US using everything from birthrates, to migration patterns and demographics like age and sex

What’s ID 2020 and are you ready to become impacted by it?