Last October, Author Julie Powell Celebrated The Deaths Of Anti-Vaxxers: Now She’s Dead (Guess What The Cause Is)

“I would argue that COVID does kill some of the right people. The anti-vaxxers/maskers are dying in legions. But yes. It’s a real shame about Kavanaugh.”

A 49-year-old author, who seemed to take delight in those who died from COVID while not having taken the jab, reportedly died this past October, with reports saying the author passed away due to cardiac arrest.

On October 26th, Julie Powell died of cardiac arrest at her home located in upstate New York, leaving behind her husband with whom she bore no children with during their marriage.

The author gained fame in the early 2000s with her personal blog documenting her attempt to recreate every recipe from Julia Child’s “Mastering the Art of French Cooking,” which eventually was turned into a novel in 2005 and was adapted to the big screen in 2009’s “Julie & Julia.”

But like many people in close proximity to or having direct conduit with the liberal elites in Hollywood, Powell wasn’t exactly the warmest person with regard to those who lean right of center or who opposed things like forced COVID shots and mask mandates.

In fact, she was among those who quite literally celebrated the deaths of people who passed away from COVID who may have avoided the jab or pushed back against mandates.

In a twist of irony, slightly over a year before her death, Powell took to Twitter on October 2nd, 2021, in response to another Twitter user’s complaint that Justice Brett Kavanaugh, whose positive COVID test from the day prior, made headlines, was faring well after the diagnosis.

The Twitter user Monjula Ray had written, “Covid never kills the right people. Our rapey Justice will be just fine. Real tragedy.” Powell, directly responding to the aforementioned post, had smugly quipped, “I would argue that COVID does kill some of the right people. The anti-vaxxers/maskers are dying in legions. But yes. It’s a real shame about Kavanaugh.” 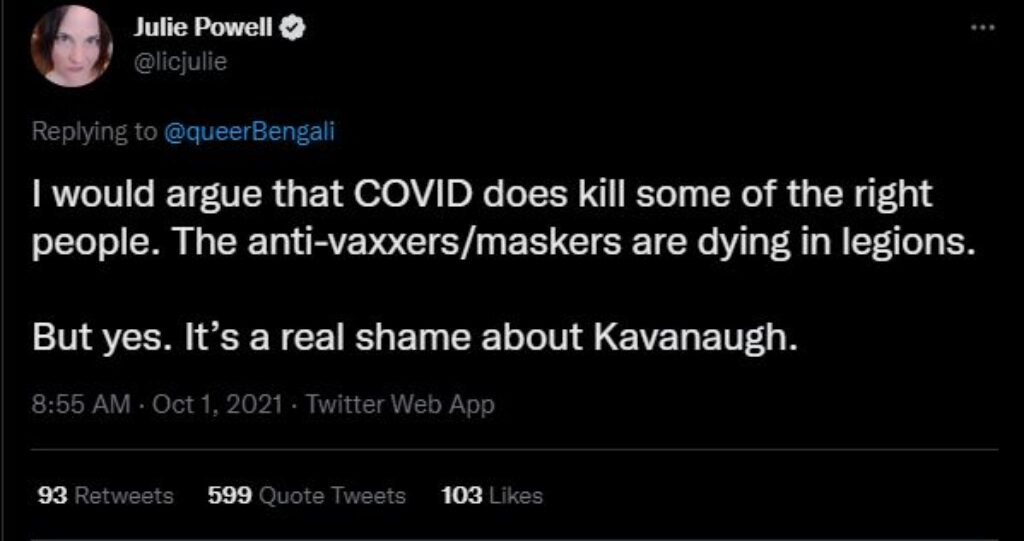 It turns out that Powell held a general disdain for anyone right of center, frequently posting on Twitter about her absolute contempt for her neighbors who had various pro-Trump signage and flags throughout their yard. Powell even decried her “across-the-street neighbor’s 11-year-old kid” who was “wearing a Trump t-shirt whilst shooting his brethren with nerf bullets,” claiming the sight of such was encroaching on her “last frayed nerve.” 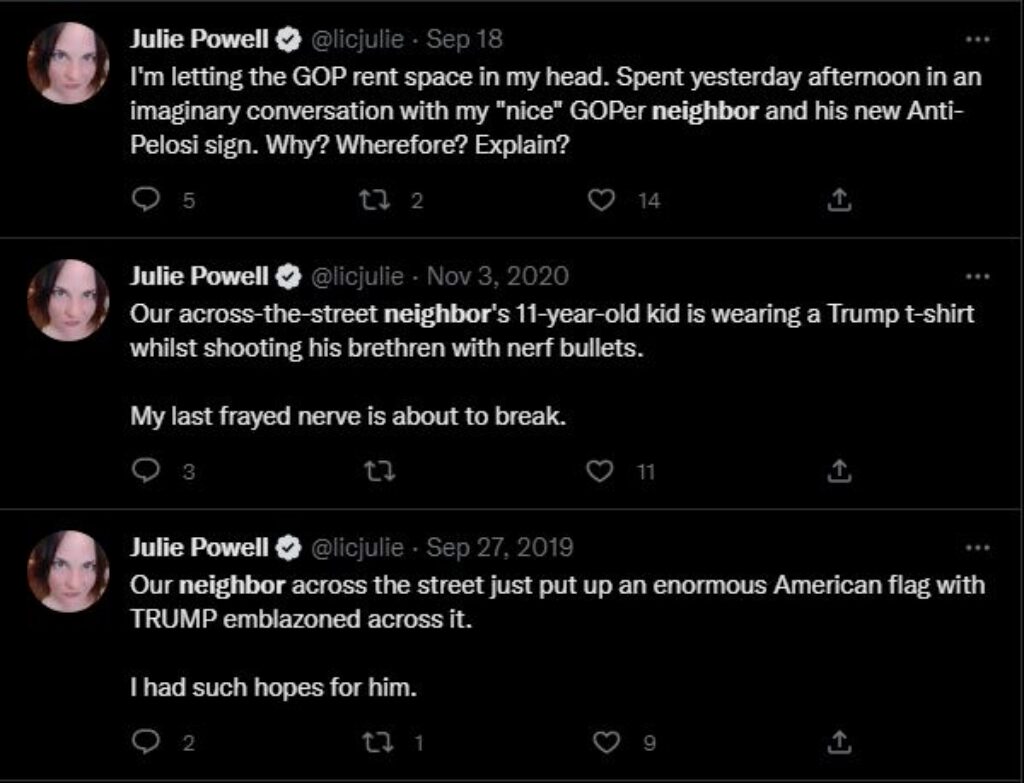 But aside from Powell’s pettiness toward anyone right-of-center, she’d periodically reveal her ghoulish side in terms of wishing harm and death upon people who are ideologically opposite of her, writing this past July, “It’s a terrible thought. But man, do I wish [Texas Governor] Abbott would die in an un-air-conditioned single wide.”

When election season was in full swing two years ago, Powell graced her online audience with her take on the September 29th, 2020, debate between Trump and Biden, writing, “God. They’re both so old.” One of Powell’s followers responded to her observation, rhetorically asking why Trump hadn’t had a heart attack yet. Like clockwork, Powell unleashed her ghastly side, writing, “Can’t have a heart attack if you don’t have a heart. That’s why all the wrong people die.” 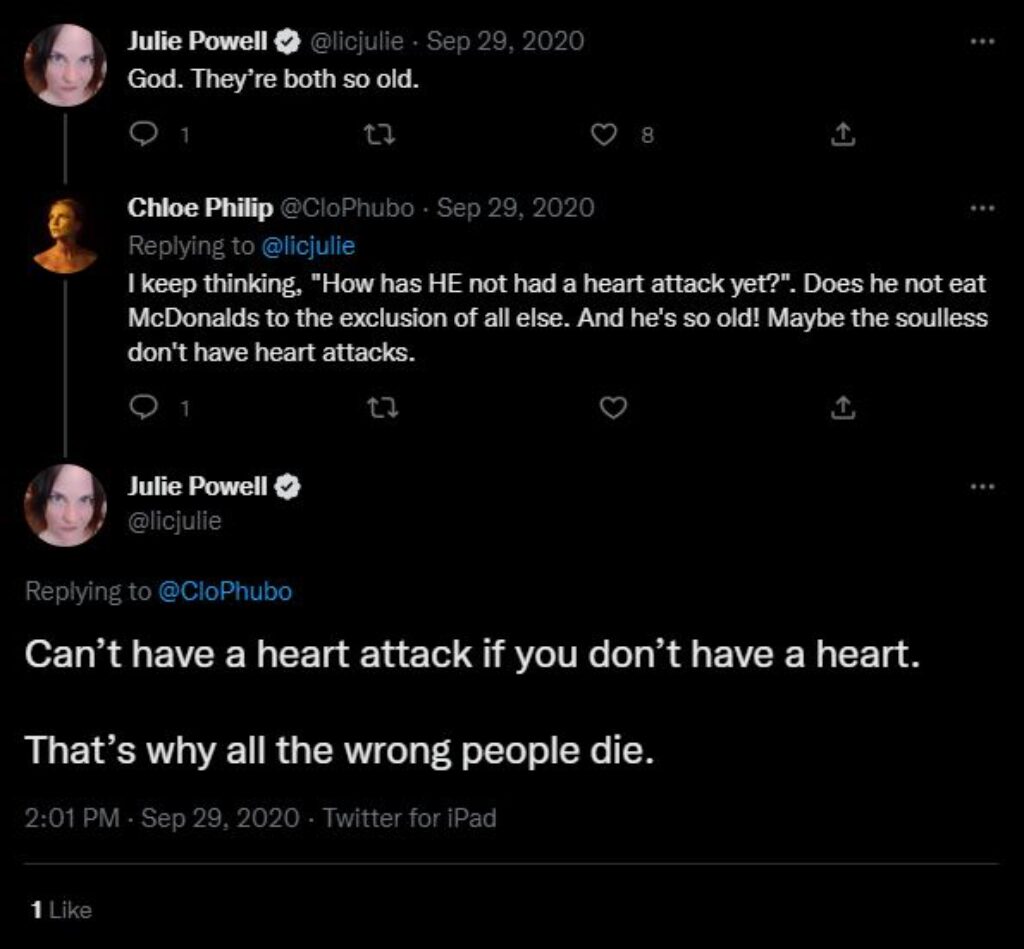 In another example of irony, Powell seemed to prophesy her own death – back in October of 2021, no less – telling her online followers, “I’m either going to die next year or when I’m 112. I’m not sure which prospect terrifies me more.”

It probably shouldn’t come as a shock that Powell had taken the COVID shot and also bragged about getting her booster last December. However, despite being jabbed and boosted, Powell somehow still managed to come down with COVID in September of 2022. On September 13th, Powell posted, “Weirdly, my COVID is getting worse. Terrible headache, cough, probable fever, fatigue.”

Powell wound up recovering from COVID later in September but was dismayed at the news that she’d have to wait three months for her next booster shot. Obviously, that time would never come, given her passing roughly a month later, but it does reiterate her fervor with regard to frantically getting her hands on these booster shots.

Come October 25th, one day before Powell passed away, she made her final post on Twitter that read, “So I woke up with something that’s literally Black Hairy Tongue. People, including my doctor, seem to think it’s no big deal and will go away soon, but it certainly is gross.”

For the sake of context, black hairy tongue (yes, it is a real thing) is apparently a benign condition, with the Mayo Clinic describing it as “a temporary, harmless oral condition that gives the tongue a dark, furry appearance” which is typically the result of “a buildup of dead skin cells on the many tiny projections (papillae) on the surface of the tongue that contain taste buds. These papillae, which are longer than normal, can easily trap and be stained by bacteria, yeast, tobacco, food, or other substances.”

Nonetheless, Powell’s case is now among a growing list of seemingly unexpected cases of fatal heart problems with folks who’ve subjected themselves to the COVID jabs and boosters – which these shots and boosters obviously did nothing to stop Powell from contracting COVID, either.

But what Powell’s unexpected demise also illustrates is that when one calls on proverbial demons to terrorize their adversaries, those same demons they wished upon others may come knocking on their very own door one day – a manifestation of the various aphorisms professing the sentiment of “you get back what you put out into the universe.”

Powell clearly celebrated instances of people who died from COVID if they were among the ilk who didn’t religiously mask up or declined the COVID shot and routinely wished death upon people whom she simply disagreed with politically.

Now, in the wake of all that abhorrent gloating, Powell wound up fostering her own death. It’s hard to offer a sympathetic eulogy for the type of person who would’ve smirked and rendered snarky comments over anyone else’s death who were either conservative leaning or against the COVID shots – the population who were vilified and victimized during COVID are running low on compassion in that department nowadays.