A man attempting to walk into a Walmart without a face mask was physically confronted by an employee who tried to block him from entering the store. Footage of the incident, which took place in Orlando, Florida, over the weekend, showed an employee immediately run to the automatic doors at the front of the store to block the man, before he tried to shove the employee out of the way.

39.6K people are talking about this

The man pushes the employee, who backs up – leading to the man slipping and falling on the Walmart floor.

The man gets up and resumes to make his way into the store as the overzealous employee continues to put his hands out to block his path.

At one point the employee attempts to grab the man’s arm – which likely doesn’t jive with social distancing guidelines – and the man pulls away angrily.

“Bro, you gotta wear a mask,” the person filming the confrontation tells the man.

“I need you out!” the employee (who is wearing his face mask incorrectly below his nose) tells the mask-less customer, who does not listen and continues to walk into a store aisle.

At the same time another employee witnessing the confrontation is seen removing her face mask before she begins to phone someone.

1,238 people are talking about this

Eventually, the Walmart workers are able to force the man to leave the store.

“Look at what you did to me, man,” the employee tells the man, who yells back, “I ain’t done shit to you!”

“[You’re] spitting all over the f—ing place!” another person tells the man. “Leave!”

In a statement in April, Walmart said stores were making masks mandatory for employees, and would only be encouraged for customers; however, each store abides by local and county health initiatives.

Orange County, Florida, where the Walmart is located, passed an ordinance Saturday requiring everyone to wear face masks in public.

The video is reminiscent of footage out of Staten Island last month where mask-wearing customers mob-shamed a mask-less customer for shopping without a mask. 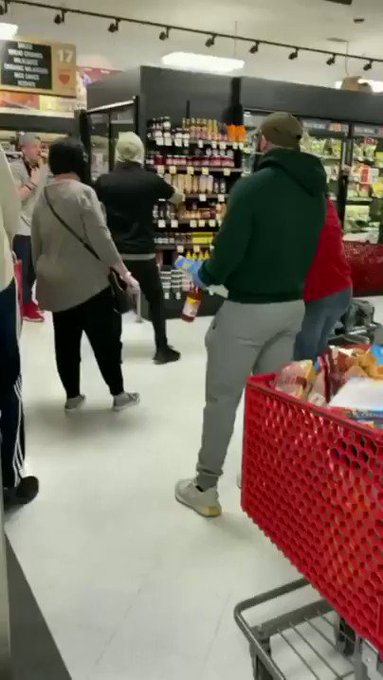 32.9K people are talking about this

How to make diesel fuel from water and air