US Green Cards and Work Visa’s Banned till 2021

President Trump has extended a ban on all new US Green Cards and work Visas till the end of the year due to the the high number of newly unemployed American Citizens.

As expected given the polls showing Joe Biden building a solid lead over President Trump in both (relatively meaningless) national polls of likely voters and online betting markets (which can also be skewed by a systematic betting), the White House will extend the suspension of immigration into the US imposed back in April, weeks after Trump started cutting off travel from China, and then the EU.

The measures will ban all new green card applications for the rest of the year and introduce restrictions on other visa categories including (mostly temporary) H-1Bs, which are frequently used by technology companies, and H-2s.

Immigration into the US has dropped to zero amid the coronavirus outbreak, even as hundreds of thousands of Americans have fled cities like NYC.

Biden Accuser Will Vote For Him

Trump Rally In Tulsa Will Highlight Division Between Supporters, Rest Of America

Barbra Streisand Says Trump Is “Dangerous To Our Health”

We all *know* immigration levels have fallen drastically due to coronavirus restrictions, but it’s pretty wild to *see* it through monthly State Dept. visa issuance data: 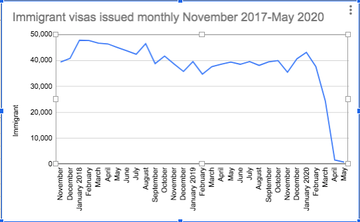 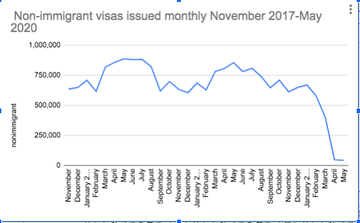 77 people are talking about this

“He is leading an ‘America First’ recovery and as part of that. He’s extending and expanding the suspension of certain visas…through December 31,” the official told the FT in a comment about the decision. Trump started the process by banning green card applications first for 60 days back in April, before deciding on the permanent ban.

The administration believes the decision will save 525,000 jobs, mainly in the highly overcapitalized tech space.

Maybe some of these virtue-signaling tech companies can start training and recruitment programs allowing anyone to apply for subsidized education with a promise/commitment of employment?

Do We Have the Energy to Change the World? – Andrew Johnson

In Italy 7 out of 10 “Covid” Deaths are Vaccinated